Youngs Auto Center & Salvage > About Us > Meet Our Owner 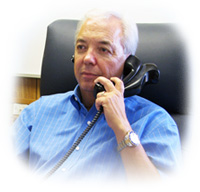 Young’s Auto Center and Salvage is individually owned by Ricky Young of Benson, NC. Mr. Young’s leadership role in the recycling industry began in 1972 after taking over the day to day operations of the family business and introducing one of the area’s first mobile crushing units. His passion for the well being of the auto salvage industry, his employees, the local communities and the thousands of Young’s customers is evident in every used part sold and every car crushed. If you were to visit Mr. Young at his Benson office and ask him the secret to his company’s success, he would reference a plaque on his wall that reads: “Things may come to those who wait, but only the things left by those that hustle”. He lives and works by those words daily as you are equally as likely to find him filling in for Young’s loader driver, a truck driver, or a parts salesman as you are to find him performing his duties as an officer and advocate of the salvage industry in meetings with dignitaries in Washington, DC. A quick glance at Mr. Young’s Bio Sheet tells you all that you need to know about his commitment to excellence and the “Hands On” ownership support that comes with every Young’s product or service.